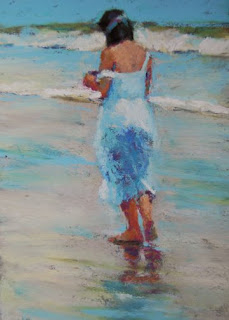 SONNY is a 5x7 pastel on Pastelbord.


Sonny was one of our models in the Daytona Beach class. During lunch one day, all 11 of us went to the beach with our cameras and followed Sonny around as she skipped and kicked and splashed in the water. It made quite a stir. People all around were asking, "Who is she?" One guy asked to have his picture taken with her. They thought we were the paparazzi and she a celebrity. We didn't have the heart to tell them.
Posted by Margaret Dyer at Thursday, April 30, 2009 2 comments:

IRIS IN MY GARDEN 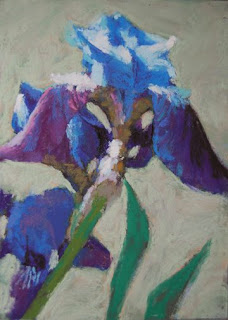 IRIS IN MY GARDEN is a 5x7 pastel on Pastelbord.

I've been working on a garden for about 7 years. I hate to think how many plants I've lost, how much money wasted. But I'm determined to have a cottage garden. It's beginning to happen. It's still not a lush, mature garden, but it's in the making. Every year I thank God he's let me live to see another spring. I hope I live to be a little old gray haired lady (I'll have to quit dyeing my hair to see it--and start losing some weight) with garden gloves and a wide-brimmed hat, surrounded and overwhelmed by my flowers.
Posted by Margaret Dyer at Thursday, April 30, 2009 2 comments: 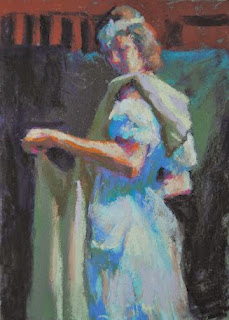 ANNA is a 5x7 pastel on Pastelbord.


Anna is my oldest daughter. Here she is posing for me in my dank, dark, dirty studio. If you could only see my studio. You'd feel very very sorry for me.
Posted by Margaret Dyer at Wednesday, April 29, 2009 2 comments: 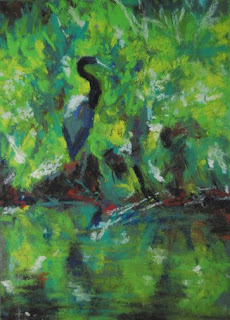 CROSS CREEK AFTERNOON is a 5x7 pastel on Pastelbord.

This is another piece from my trip to and from Daytona Beach last month, which seems like a lifetime ago. Since then we've married off my stepdaughter, I've taught three workshops, killed 6 pots of annuals, spread 20 bags of mulch, gained 3 pounds, finally saw the final episode of the Sopranos on A&E (I think he got whacked), and pandemic sweeps across the world.

But tomorrow my 5 year old grandson, Victor, comes to play. Right now, in my little corner of the world, all is well.
Posted by Margaret Dyer at Wednesday, April 29, 2009 No comments:

A CUP OF SAND, sold 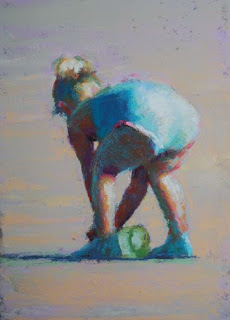 
No time to write. OK, maybe a little. But I should really be running up to the Post Office to deliver some packages, I should be preparing for a class I'm teaching tonight, writing thank-you notes to some wonderful people, doing something with my hair, planting the bulbs Terry gave me last night at the Southeastern Pastel Society meeting, working on the SPS newsletter, brushing my teeth (it's 2:30 in the afternoon)...let's see, where is that list of things-to-do today. Oh yeah, I lost it again.
Posted by Margaret Dyer at Wednesday, April 15, 2009 2 comments: 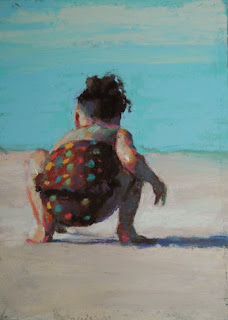 REELING IT IN, sold 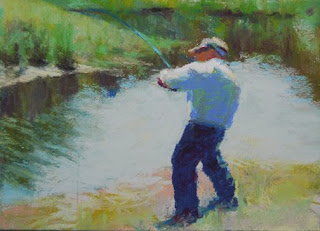 REELING IT IN is a 7x5 pastel on PastelBord. Bidding begins at $100.


I won't say exactly what he's reeling in. But he said,"Take a picture, quick, of the bent pole!" He didn't need to say what an impressive picture it would make. He'd show it off to his fishing buddies.

I didn't want to get too close to the creek; I had been warned of alligators. We were traveling home from Daytona Beach, and stopped at Cross Creek, the former homesite of Marjorie Kinnan Rawlings. She wrote The Yearling and Cross Creek there in her solitude, surrounded by her orange grove, palmettos and Spanish Moss. Her home is just as she left it, with the typewriter on a table on the screened-in front porch. Chickens and ducks roam the yard; the orange grove still bears fruit, as evidenced by the powerful aroma of orange blossoms. One of the few remaining spots in Florida that hasn't given way to development, it's now a State Park.

OK, OK. I'll tell you what he was reeling in. A fallen branch. But it was a big one.
Posted by Margaret Dyer at Tuesday, April 07, 2009 No comments: 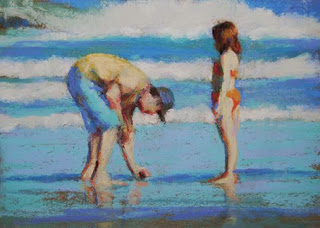 BIG BROTHER'S FIND is a 7x5 pastel on PastelBord.
Bidding begins at $100.

Already I'm missing the warm sun and the crashing waves. And I've only been home 4 days. Its been gray and cool and rainy for a couple of days here – I won't complain. My garden needs all the help it can get.
Posted by Margaret Dyer at Monday, April 06, 2009 No comments: 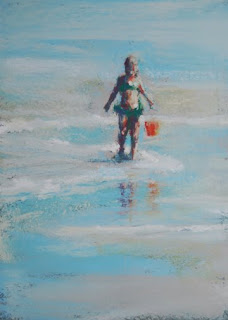 A NEW ORANGE BUCKET is a 5x7 pastel on PastelBord. Bidding begins at $100. 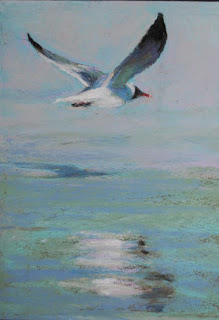 Posted by Margaret Dyer at Saturday, April 04, 2009 No comments: 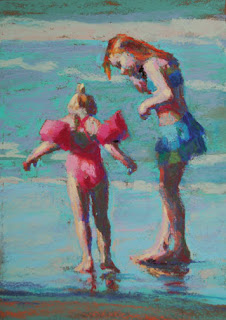 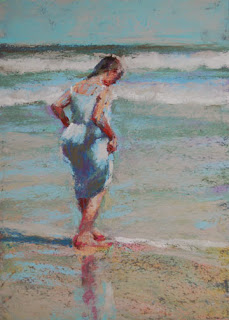 
As you might see, I've been at the beach. Daytona Beach, teaching a workshop. Those of you who took the class will recognize this as the same image I used to do a demonstration. More beach scenes to come. I love working with the sunlight and the reflections in the water. And I love teaching.

In case anybody's wondering why I seem to have dropped off the face of the earth the past few weeks, I've also been teaching up in the DC area. It's been a flurry of activity, with only a day or two between classes to catch up on bills and email and housecleaning and laundry and weed-pulling and phone calls and husband and art. Not necessarily in that order. And I'm off again next week for a workshop in Ann Arbor. I won't complain about having too much work.
Posted by Margaret Dyer at Thursday, April 02, 2009 2 comments: