Home from Huntsville and thank you, Randy Higbee. 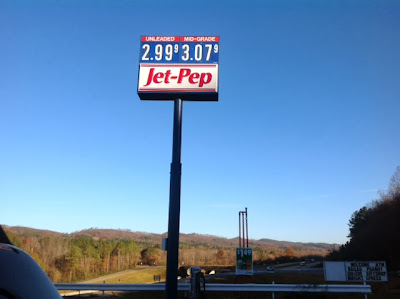 I drove through the beautiful northeast Alabama countryside yesterday morning, a crisp cloudless autumn day, on my way home from my Huntsville workshop this weekend. If you've never been to northeast Alabama, you're missing a well hidden gem. Mountains, lakes --a beautiful meandering drive.  Gas from Huntsville to Gadsden--$2.99 a gallon.

Thank you, Huntsville Art League and Shirley Barnes, for hosting the class so graciously. 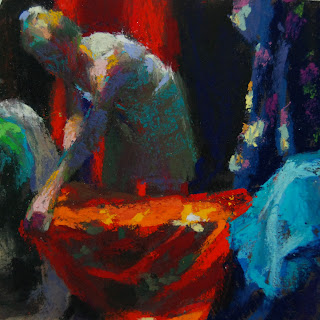 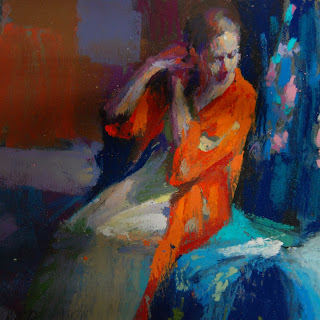 And thank you, Randy Higbee, for accepting these two pastels into your 6x6 December show. I'm always happy to get into that show. Click on the title of this blog or copy and paste the link below to see a charming little video of one of his shows. I love watching it over and over, mostly I guess because of the music:  http://www.youtube.com/watch?v=t-puUNz0DOU

It's good to be home again. I'm headed up to the studio, which, by the way, is no longer the gross, nasty, buggy, dark, damp, crumbly garage/studio. Not because I've fixed it up, but because when Kippy came into town a few weeks ago, she worked like a tornado and made me bring all my stuff upstairs to the unfinished apartment above the gross, nasty, buggy, dark, damp, crumbly garage. So now my studio is a smaller but cleaner unfinished room which I'll be lighting and heating using extension cords connected to the power downstairs in the gross, nasty, buggy, dark, damp, crumbly garage. I'll spend my morning trying to make it comfortable, cozy and inviting so I can get back to work. I'm hoping to get quite a few small pieces to auction off for December. So if you're looking for some affordable art, keep an eye out...
Posted by Margaret Dyer at Tuesday, November 19, 2013 1 comment: 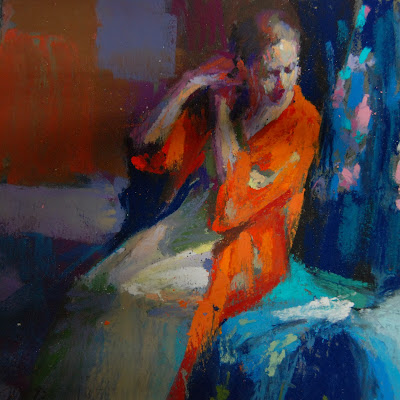 I'll be traveling to Huntsville, AL, on Thursday to teach a 3 day class for the Huntsville Art League at the University of Huntsville. Friday-Sunday, November 15-17. There is still room for more participants. Let me know if you'd like to join us.
http://www.huntsvilleartleague.org/classes/workshop-the-figure-in-pastel/
Posted by Margaret Dyer at Tuesday, November 12, 2013 1 comment:

Got another sign-up for my workshop in France. Only one space left! 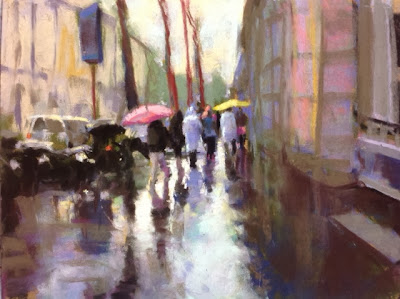 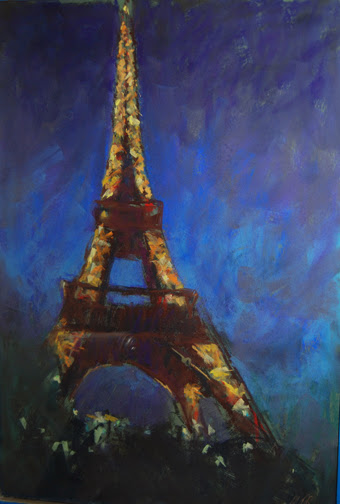 If you're considering joining me in France this June for my annual workshop at La Bonne Etoile, you'd better act quickly. We have 8 confirmed participants, and only 2 spaces left! Contact Kippy to save your space. For all the information you'll need, click on the title above or copy and paste this link: http://www.labonneetoile.com/workshops/Dyer2014.pdf . I would love to have you join us for a magical two weeks. 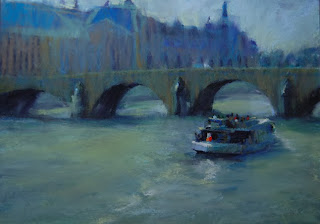 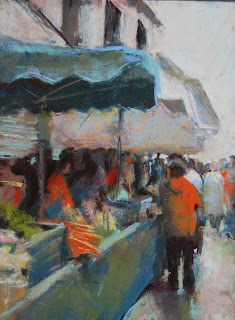 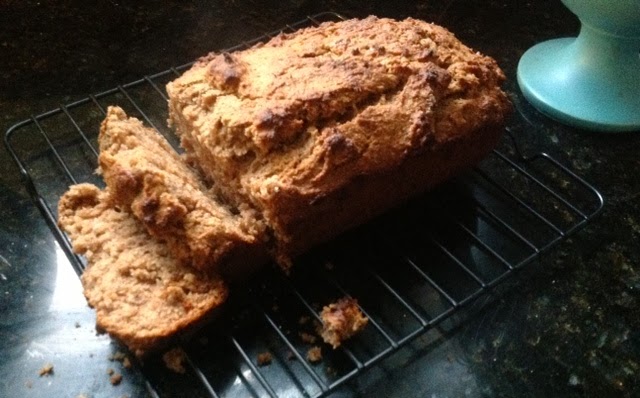 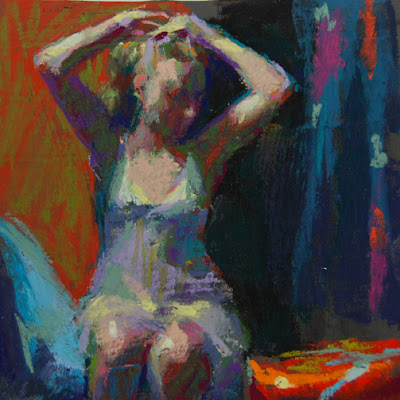 I had 4 overly ripe bananas. Do I put them in the compost? Freeze them for smoothies? No. Whole wheat banana bread! So I went to work putting ingredients in the bowl, mixing them with my hand-mixer-with-only-one-whisker, the other must have gotten lost in the move, or ex-husband is holding on to it for spite. Oops. No eggs. What to substitute? I tried a tablespoon of mayonnaise--it's eggs, right? It looked a little funky as I poured it into the lightly greased pan, but tasted delicious when I sampled the batter to be sure. It smelled divine as it cooked in the oven, and seemed to be rising appropriately. WAIT! Whole wheat banana bread? I didn't remember putting any whole wheat in it. I frantically look around, no evidence of flour all over the kitchen, which there normally would have been. And no memory of pouring the flour into the measuring cup or gooky flour stuck at the bottom of the bowl. I had to pull the boiling mixture out of the oven, pour in the two cups of whole wheat flour, mix them with the hand-mixer amputee and replace the bread pan in the oven. I'm waiting now to see what comes out. I'll let you know.

These 6x6 pastels are hopefully going to the Randy Hibee 6x6 December show in Costa Mesa, CA. If not, they'll be available on ebay. I'll let you know.
Posted by Margaret Dyer at Friday, November 08, 2013 2 comments: 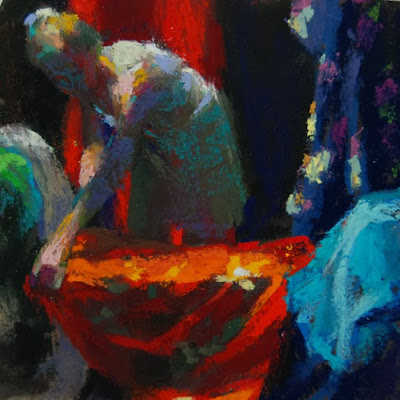 I believe I am successfully navigating the stages of grief: I have passed the "knock yourself out at night with xanax so you can't think or feel anything" stage. When I had no more xanax, I entered the "cram your mouth with chocolate and don't eat anything else for days" stage, which I have survived and am recovering from. Now I'm in the "remember" stage. Those are the stages of grief, right?

A few weeks ago, before Daniel left us, I turned off Neil Young and took a break from the gross, nasty, buggy, dark, damp, crumbly garage/studio, which I am very grateful for, and sat on the front porch talking with Daniel. I hadn't washed up, I was still wearing my paint-and-pastel-smeared-apron and my fingers were black with pigment. We watched as a shiny black pickup truck slowly passed my house, backed up and stopped at my mailbox. An elderly black man got out and said as he approached my front porch, "I bet you're the person I'm looking for." "I bet I'm not," I responded, figuring him to be selling something. "I bet you are," he said. "I bet I'm not," I repeated. "Did you put some things out last month during garbage amnesty day?" he asked.

In September the city of East Point, Georgia, held its bulk pick-up amnesty week. Twice a year you can put anything out on the curb for the garbage collectors, anything they would normally refuse -- broken appliances, furniture, mattresses, whatever. I was warned by my neighbors that the night before the pick-up, locals would scour the streets, stop at the piles that might hide something interesting, and load their vehicles with new treasures. That evening I had joined Mike and George (my next door and across-the-street neighbors who 'planted my vegetables,' installed my security light, trim my hedges and repair my lawnmower) for drinks as they watched to see how long it would take for their broken power tools and a cat-destroyed leather chair to disappear. From my window later I watched as people picked through my crumbling compressed wood-fiber office furniture and discarded old paintings, the ones I didn't have the heart to destroy.

He shook my hand and introduced himself; he was Bruce, he and his wife live several blocks away on Neeley Street. He could tell, he said, that I was the person he was looking for because of the "hasn't-been-cleaned-in-a-year apron" I was wearing -- I had to be an artist. He had rescued several of my paintings in September, one was an almost 20 year old painting of two ladies working in the kitchen, which now hangs in his house and he loves it. The other paintings now reside in his friends' houses, one of which lives on my street. He wanted to thank me, and with sparkling eyes, he did. "I believe in divine intervention," he said. Bruce joined Daniel and me on the porch and glowed as he talked about divine intervention in his life, most lately his successful battle with cancer. Now he and his wife help AIDS sufferers by printing and selling t-shirts; they purchase groceries for the needy person with the profits. The man had a message of joy which made both Daniel and me cry. Almost like an angel we thought.