An award winning piece, and an essay on chicken poop. 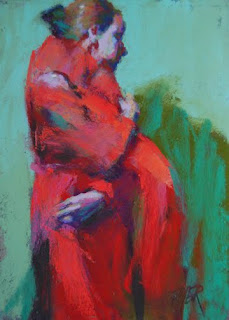 LISA IN REDS AND GREENS is a 5x7 pastel on PastelBord. Not for sale.
You've seen this one before on this blog. I had mentioned that I really liked it. Looks like I may know what I'm talking about. It was one of the winners in the recent American Impressionist Society National Exhibition in Denver.

So I was out in the yard on this cool drizzly next-to-the-last-day of October, scraping up chicken poop. No, we don't own chickens, although I always thought I'd like to. I always thought it'd be nice to go on daily egg hunts. And I've always heard fresh, home grown eggs taste better. And the chicken poop would undoubtedly make my flower garden glorious (I have since given up ever trying to grow vegetables. Ever). So Ben told our friends, Miriam and Houston, that I might like to have some of their chicken poop for my garden. They were more than happy to oblige. Ben came home one day this summer with two huge containers of black mush, which smelled suspiciously like, well, you know.

I was a little bewildered, because I had imagined that chicken poop would be dry, almost granular, and easy to scoop and spread around. I wasn't quite sure what to do with this. I thanked Ben profusely, then got my trowel and scooped a little out and tried to spread it on top of the soil. It didn't spread, it stayed in a gooey clump. I tried chopping it, smearing it, stirring it. Very distressing. And surprisingly smelly. I had no idea chicken poop would actually smell like, well, you know.

Needless to say, I was a little daunted with the enormous amount of the stuff. So we've been maneuvering our cars around the two containers in the driveway. They've been there for months, getting rained on, waiting for me to figure out what to do with them. Somewhere in the back of my mind I thought Ben would magically make them disappear.

And it finally happened. I must have run over one with my car, while trying to evade the awkwardly parked truck. I let that sit for a couple of days, thinking Ben might make it magically disappear. But he finally said, "When are you going to do something with that chicken poop (he didn't use that word)? "Oh, was all that for me?" I asked.

So today in the drizzle I scraped and slung and sweated and stunk. But I think I actually am the winner here. I dumped quite a bit of it in an area that hasn't been, but will be a new garden bed next spring, much to Ben's chagrin. Ben'll never know what hit him.
Posted by Margaret Dyer at Friday, October 30, 2009 5 comments: 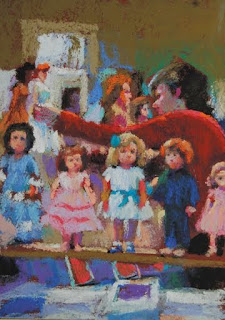 HER FIRST BARBIE is a 5x7 pastel on PastelBord. Bidding begins at $100.

It was "Ideals"! Thank you everyone who remembered the name of the publication. And Holly even sent a link to ebay where you can buy the old magazines: http://shop.ebay.com/items/ideals%20magazine?_dmd=2&_sop=1&rvr_id=&keyword=ideals+magazine&crlp=1869420203_9398&MT_ID=475&tt_encode=raw
Posted by Margaret Dyer at Thursday, October 29, 2009 No comments: 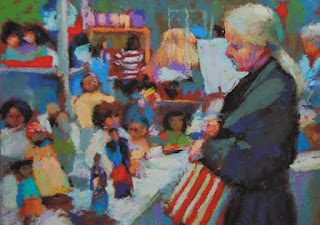 THE DOLL SHOW is a 7x5 pastel on PastelBord. Bidding begins at $100.

This has nothing to do with that, but I was notified yesterday that in the American Impressionist Society National Exhibition, I won two awards: Third Place and the WindRiver Arts Award. I'm thrilled--it's a very prestigious show. Here's a link to the Saks Gallery in Denver, where the show is being held. www.saksgalleries.com/exhibitions.html
Posted by Margaret Dyer at Tuesday, October 27, 2009 3 comments: 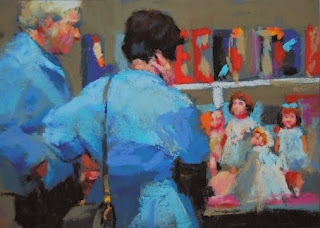 A PATIENT HUSBAND is a 7x5 pastel on PastelBord. Bidding begins at $100.

Yesterday, after church, my husband, Ben, and I loaded up our bikes in the back of his pickup truck, and drove to meet my brother-in-law, Joe, to ride the Silver Comet Trail, a paved bike path on the old abandoned railroad lines in northwest Georgia. We rode the path from Rockmart, along rushing creeks and past quiet subdivisions and freshly mown hayfields, uphill, downhill, meandering and forgetting all but the beauty of the day . The gold and orange fall colors reminded me of those old periodicals I saw in Dentist offices as a child (can anybody recall the title?), full of color photos of idyllic rural scenes: churches in the snow or autumn landscapes, always with inspiring poetry or prose. When I tried reminding Ben and Joe about those books, which I'm sure everybody grew up with, they looked at me blankly and Ben said, "Boys didn't read those things. We used to read National Geographic." "We used to read Playboy," Joe added, "for the same reason." They both nodded in agreement.

I'll never figure out why men and women are so different.

With a few hours left in the day, Ben and I drove an hour north to a friend's barn, where we sat quietly, him with a rifle, me with a camera, hoping a deer would emerge. We always thought it'd be a great thing to do together. I could shoot all the raptors he's always telling me about--owls, falcons, hawks, kites; he could hunt. I could be creative, he could be a man. But we learned all too quickly that this just would not work. We forgot how much noise a camera makes when you click the shutter.

Which has absolutely nothing to do with todays picture. The picture is from a doll show I attended recently with a friend. I always feel so fondly toward the men I see attending these sorts of functions.
Posted by Margaret Dyer at Monday, October 26, 2009 5 comments: 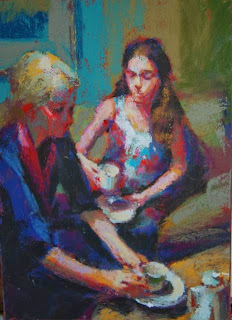 My workshops in France this spring are finally finalized and will be announced online next Tuesday. I've been given the opportunity to announce them to my mailing list first (forgive me please if you get more than one email--you may be on more than one of my lists. If you know of anyone who might be interested, please pass this on.

The maximum number of students in each class will be 7 or 8 (not sure yet), so it should be a wonderful time for all of us. Here are details: 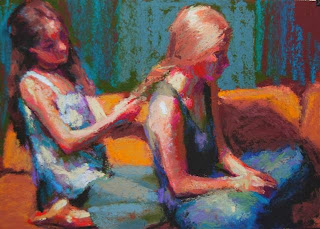 Posted by Margaret Dyer at Friday, October 23, 2009 No comments: 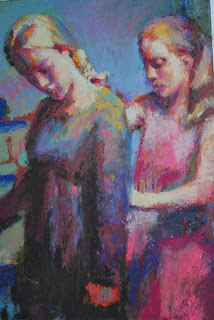 Posted by Margaret Dyer at Thursday, October 22, 2009 No comments:

Posted by Margaret Dyer at Wednesday, October 21, 2009 No comments: 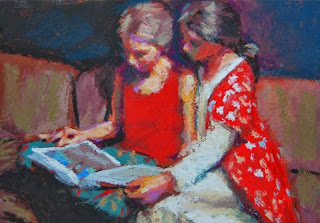 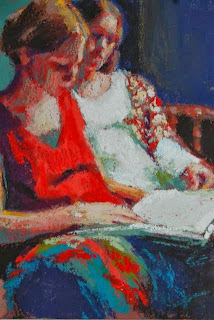 NUDE IN THE DARK, sold 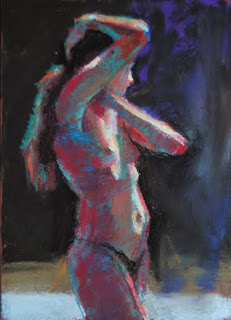 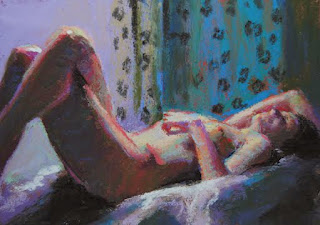 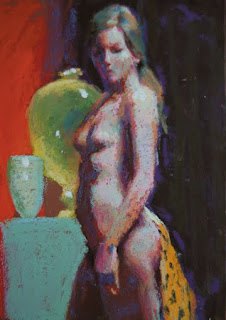 Posted by Margaret Dyer at Friday, October 09, 2009 No comments: 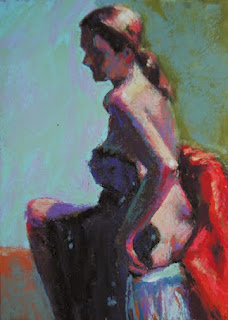 ANOTHER PROFILE is a 5x7 pastel on PastelBord. Bidding begins at $100.
Posted by Margaret Dyer at Thursday, October 08, 2009 No comments: 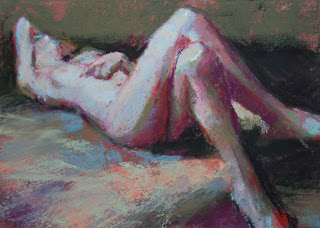 OLIVE GREEN AND CRIMSON is a 5x7 pastel on PastelBord. Bidding begins at $100.


I sometimes have a burning desire to write, with no idea what to write about. That's how it is at 12:45 a.m. right now. I'd love to write something poignant. Or funny. Or even just interesting. But nothing comes to mind.

I have had a burning desire to write a children's book since I was a kid. I want to create another world to escape to. If it's ever to happen, it better happen soon. My mother was an English major (which probably explains why all of my siblings and I are grammar nazis). She and I used to toy with the idea of her writing a book, and me illustrating it. For her birthday one year, I gave her a suede notebook. I waited for months for her book to take form. One day she showed me the first sentence. I loved the first sentence and couldn't wait for the rest of the book. But mom was sick, and the story never got any further.

I want to write but have absolutely nothing to say. So I guess I'll go to bed. Maybe inspiration will come in a dream.

Pardon me for ending so many sentences with prepositions.
Posted by Margaret Dyer at Wednesday, October 07, 2009 9 comments: 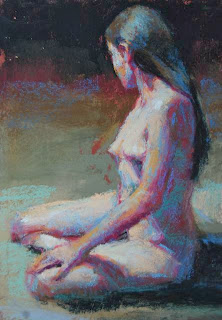 LONG BLACK HAIR is a 5x7 pastel on PastelBord. bidding begins at $100.


As a member of DailyPaintworks.com, I have made a commitment to post at least 9 images a month on my blog. Last month I fell short. So when I feel the urgency to produce new work, and don't have the time to schedule a new photo shoot with a model, I refer again to my files. This is one of those. A model who posed for a class I taught in Mukilteo, WA, a few years ago.
Posted by Margaret Dyer at Tuesday, October 06, 2009 No comments: 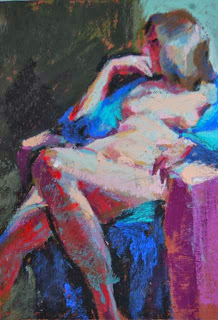 PENSIVE NUDE is a 5x7 pastel on PastelBord. Bidding begins at $100.

No time to write. Am on my way to visit stepdaughter's new baby in the hospital (birth announcement below, photo taken by me), then on to the Carrollton Cultural Arts Center for a 'dress rehearsal'. The Carrollton Creative Writers Club, of which I am a member, has been given the opportunity to read some of our work for a couple of hours during MeccaFest Art Festival, October 10 & 11 (http://www.meccafest.com). Tonight we're doing a run-through so we look like we know what we're doing this coming weekend.

Hope to have more to say tomorrow. 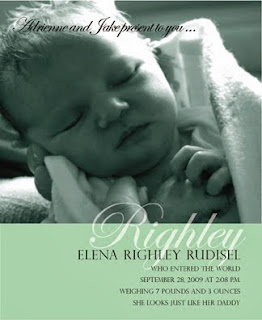 Posted by Margaret Dyer at Monday, October 05, 2009 No comments: 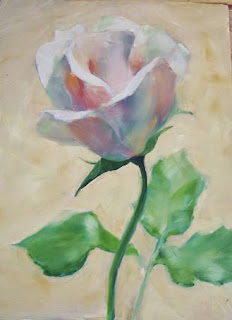 Solitary Rose is a 30x40 oil on board. I just put it up here because it seemed to have some relevance to my blog today. I painted it in 2006. It still sits somewhere deep in that hovel I call my studio.


I just couldn't go into the studio today. It just wasn't in my heart. So I piddled around this morning checking email, gave myself a manicure, wandered outside into this beautiful early fall weather and thought, what's to stop me from transplanting a few day lilies. Within a half hour I had completely destroyed my manicure, dug up and divided clumps and clumps of day lilies, planted them in a curved border all along the front of the house in front of the azalea hedge, pulled up clumps of iris', which were practically above ground anyway, and with shovel in hand, dug around my gardens throughout the yard and put those tubers which survived my clumsy efforts into their new homes.

Within minutes of kneeling down and planting my first day lily however, I thought, how nice to get away from art for a while, and immediately realized again how very fortunate we artists are. How fortunate I am to spend my life creating beauty (or at least striving to), and how fortunate I am to work so hard at it, that I have to find time to get away from it. Art is truly a gift, one that I acknowledged at a very early age. Through a lifetime of feeling inadequate, I have always been humbled by this gift, this responsibility also, that affirmed.

And as if this wonderful moment of awareness wasn't enough, as I finished up the new day lily bed I noticed one gardenia in bloom, all alone in my enormous gardenia bush. I leaned over to get a deep whiff, and was immediately transferred in time to our home in Clearwater, Florida. I was 12, we had gardenias, and my mother was alive. And her face, her presence, became momentarily vivid.

Another gift. Thank you, God.
Posted by Margaret Dyer at Thursday, October 01, 2009 6 comments: