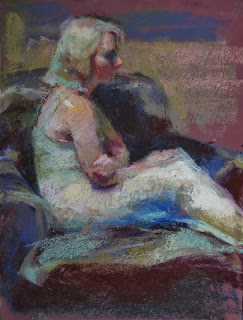 If I don't get this house, I'm going to be pretty bummed. I'm already allowing myself to 'decorate' it. Can't sleep for all the furniture arranging I'm doing. And then I wasted almost a whole day designing a house warming invitation. I'll get over it if it falls through. But it's actually reassuring to me that I've got such great expectations, rather than living in the slough of despondency. Dang, what the human brain is capable of is a mystery.


"Catherine" is a 9x12 pastel, which will be in my show at River Gallery in Chattanooga, March 1-31. 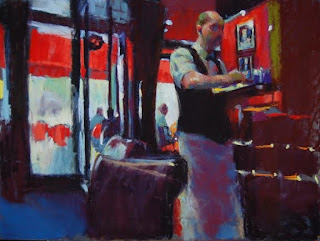 I'm beginning to feel good. That may not seem significant, but it's quite a statement since I've been unable to say that for almost 3 years. I've been in a very dark place, thus, the silence in my blog. But with final divorce papers in my hand, I've relinquished all hope of repairing a broken marriage, and I'm determined to make the most of this new chapter in my life.

That said, things are happening quickly here. My second year lease at this sweet, small and safe Villa Rica studio apartment ended almost exactly as my divorce papers arrived. Time to move back to Atlanta, where family and friends are, and search for a new home. I want a house to call my own, with a garden. Nothing big. Just something to call my own.

I received a phone message from my sister the other day telling me of something she heard on the TV--Wells Fargo's new program, Neighborhood Lift, offering downpayment assistance to people who fit the criteria and are willing to move into the depressed areas of town. Forgivable downpayment if you live in the house 5 years. What the heck, I thought, I'll give it a try. I made an appointment, showed up for it at the World Congress Center this past Sunday, bringing a folder full of required paperwork, filled out forms, was herded through a series of loan officers and waited anxiously as the computers processed my information to see if I qualified. Finally, I was pointed toward the shuttles, which herded people to different intown neighborhoods, holding in my hand a piece of paper congratulating me--$15,000 has been set aside to be used as my downpayment at the closing of my new house--wherever that might be.

I chose the West End shuttle because that's what my approved mortgage amount allowed; the other neighborhoods were way over my limit. One of the houses, a charming bungalow in perfect condition, had everything I wanted-space for a studio, a small basement-- and was in my price range (I've actually been looking for months at houses, so I was able to make comparisons). Next day I brought some family and a real estate agent (also family), who agreed the house was perfect--hopefully the neighborhood would also be one day. We made an offer, today the counter-offer arrived and I am signing the contract.

I also just received an email from the Wells Fargo loan officer telling me that there may be more grant money for me--she's looking into it.

I'm going to write about this as the process evolves. I know it's wordy; you don't have to read it. But it may inspire some people to try for some of that free money that's out there. And it's out there.

The picture above, "La Rotonde Cafe, Paris" is an 18x24 pastel, and will be at my upcoming show at The River Gallery, in Chattanooga, TN.

Would love to see you there.
Posted by Margaret Dyer at Tuesday, February 14, 2012 13 comments:

February 6 - 11, 2012
The Trinity School Spotlight on Art Artists Market is one of the largest and most diverse art markets in the Southeast. Guests discover a selection not found in any other gallery at once, curated to include pieces from both well-known names and new artists. With prices from $5 to $5,000, there is literally something for everyone.


The Artists Market is presented on the campus of Trinity School and is open to the public with free admission and parking. For directions, go here: http://www.trinityatl.org/spotlight_on_art/directions.aspx
Posted by Margaret Dyer at Monday, February 06, 2012 No comments: 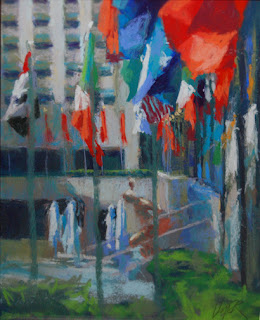 It should be a pretty amazing show. Over 350 artists. When dropping off my work on Saturday afternoon, I saw a lot of beautiful work. If you're looking to purchase something for your home, you need to drop by Trinity School this coming week. Here's their web site for more info: http://www.trinityatl.org/spotlight_on_art/market.aspx
Posted by Margaret Dyer at Sunday, February 05, 2012 No comments: