AN UPDATE ON OUR COOKBOOK. click to see more. 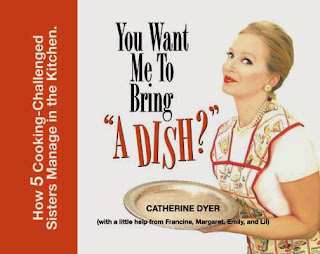 Many of you may not have heard me mention this, but my 4 sisters and I have written a cookbook (which I created on my Mac using Photoshop and InDesign) for people who don't cook, because we don't cook and thought there'd be a place for it. We self-published it on lulu.com, have tried to create a little publicity about it by having book signings around Atlanta. Well, the Associated Press thought it was interesting enough to mention in an article about self-publishing. The article (with picture of my sisters and me!) was published online and in newspapers across the country. Since then, the Atlanta Journal and Constitution, having seen it, wrote an article on us; we've been contacted by a publisher; and now we're talking with an agent in New York, who loves it and has asked for 10 copies to send to her publishers. We are freaking out at the response. I'll keep people updated on the book's progress.
Posted by Margaret Dyer at Saturday, January 26, 2008