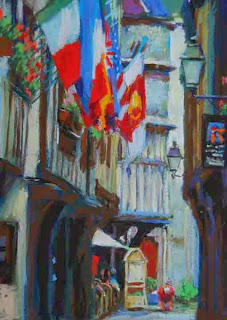 I don't know if you can see him in this image, but there's a man kneeling in prayer in the middle of the street outside a little cafe in Troyes, France. I think he was actually a beggar pretending, but I found the image compelling. The Penitent is a 12x16 pastel on PastelBord, available from River Gallery, in Chattanooga.

I must tell you about my little family get-together last Tuesday night. My 4 sisters and I planned to celebrate my Dad’s 87th birthday with a simple dinner at his retirement home. Because Dad’s apartment is so small, we decided to set things up in the common sitting area on his floor, a relatively private place off the main hall. Catherine was supposed to make lasagna, but at the last minute couldn’t, so Francine substituted with a little frozen pasta dish, enough to feed 4, the box said (she decided she wouldn’t eat). Emily was to bring paper plates and plastic forks, which she hurriedly purchased en route to Dads, after teaching her high school English class, but inadvertently left them all at the store. Lil, the Esthetician, had a facial, so would be late. I brought a salad and a couple of bottles of wine. So, we got there, I set up the salad and wine next to a birthday cake someone had brought; Francine and Catherine were in Dad’s apartment waiting for the frozen pasta to finish cooking. I was a little surprised to see some of the residents (inmates, Dad calls them) hobbling out of the elevator with their walkers and canes to our room and sit down with us. More and more of them. I offered them wine and wondered when they would leave; we didn’t want to be rude and eat in front of them. They didn’t seem to be leaving anytime soon, so I suggested we serve the cake first, then they’d leave. One of the inmates, realizing what was happening, discreetly ran down the hall to her apartment to scrounge around for little paper cake plates and plastic forks. I was in the process of cutting the first piece, when I heard Dad saying to one of the inmates that dinner would be ready shortly. Turns out, Dad had invited his closest friends to celebrate with us, and didn’t bother to tell us. I ran down the hall to inform my sisters, who were in the process of cutting up the steaming hot pasta dish into 4 sections, that everybody was waiting to be served dinner. For the rest of the evening we all looked like deer in headlights: Catherine frantically scooped tiny spoonfulls of pasta onto the little cake plates. Francine slathered butter on bread. Hiding out in Dad’s apartment, we handed the little plates to Cecily, Francine’s daughter (who showed up to wish Dad a happy b-day), told her to put a huge pile of salad on each plate and serve everybody. Cecily was running back and forth from the public room to Dad’s apt. to get more little dishes, and then asked in a frenzy, “Why am I the only one doing this?” Francine, Catherine, Emily and I all cowered, “We’re not going out there!”

But we did, eventually. Catherine plopped what little was left of the pasta onto a little paper plate and I carried it out to the larger room. Everybody was munching happily on their little dinners. We were even able to offer people a little more; all seemed perfectly happy and full. Then we served cake. When it was all over, we collected 12 baskets of loaves and fishes, I mean, there were LEFTOVERS!

Dad was oblivious the whole time.
Posted by Margaret Dyer at Friday, April 01, 2011