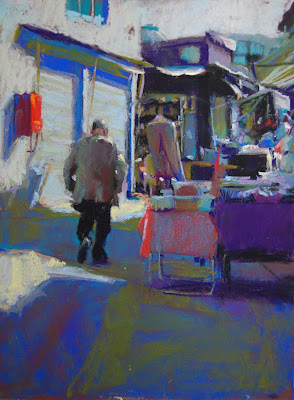 If you've been following my blog for any length of time, you've probably already seen this pastel several times. I'm posting it again because it is on its way to the Pastel Society of Eastern Canada in Montreal (PSEC) for its International Juried Exhibition in honor of PSEC's 20th Anniversary.

Reine Goodrow, who recently stepped down after four years as PSEC President, sent me this lovely email:
I would like to have you be part of our celebrations. Our show will contain 100 pastel works, as usual, but a dream of mine is for that show to have one work from each of the American Masters who has honored our Society in the past by coming to Montreal to give a workshop; to have a wall of American Masters for all of our members to be inspired by and by which to remember you all. It would be a thrill for our Society to be able to show-case the excellence of the medium in that way... Our show receives as many as 2000 visitors, and seeing a collection of American Masters’ works in person would be the greatest inspiration for our artists and the best source of education on pastel for the public at large."

Reine, I'm honored. And I hope it arrives safely.