An update on Kia and her kids...

On a freezing day this past December I met Kia and her two little boys in a laundromat, where they were taking shelter from the cold. Long story short, I made a place for them in the unfinished room above my studio. It has gas heat and a refrigerator. There is no plumbing so they had to come into my house to use the bathroom and laundry. I gave Kia the key to my home. 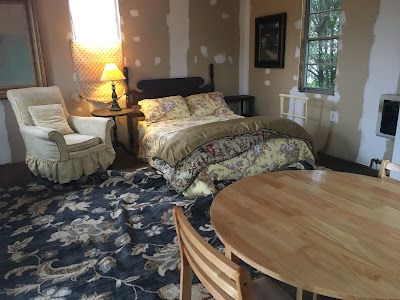 Our objective was ambitious: to get Royalty, her 5 year old, into school, get Eden, her 1 year old, into daycare, get food stamps, get Kia a job and an apartment, and eventually get her a used vehicle so she wouldn't have to rely on the buses and train system here in Atlanta, while pushing a stroller and having a 5 year old tag along behind her. I started a Go-Fund-Me page and the response was overwhelming: $4300 in only days, mostly from you generous people who read my blog.

I helped Kia open a checking account with Wells Fargo, into which all the Go-Fund-Me donations were directly deposited. She now has a debit card to purchase all the daily necessities like diapers and train fares.

To update you two months later: a promised job never materialized, neither did food stamps or daycare. There was one opportunity which came to us. A dear artist friend who takes classes from me on Wednesdays has spent the last 30 years working with the homeless. She had connections who could channel Kia through a system that would have enabled her to receive job training and placement, child care and shelter. Kia declined, "I don't want no caseworkers." Kia left Atlanta this week to return to her home in Kansas City. But your money kept these children safe and warm during the cold days.

I received this text from Kia the day after she left, "We almost there. I got a job at greenies. Eden will go to my aunt daycare and I'm transferring Royalty school. I will be living with my sister until apartments call me I'm doing my apps next week. Thank you."

I'm going to miss Royalty. So will Krash. Krash is a shiny black lab with a ferocious bark who lives next door. Anybody who dares rattle the gate to enter my back yard will be terrified by the charging gate-keeper. He still does it to me. But he would sit at the fence and wag his tail to wait for Royalty to share dog biscuits with him.

Would I do this again? No. Not the same way. Things got complicated--there was a boyfriend, there were housekeeping issues, there were boundary issues. If Kia had not been as honorable as she was, there could have been more serious issues that I had not considered when things felt so urgent. Next time I'll buy a meal for the family, give them some cash, and try to secure shelter through other means.

I'm reclaiming my house this weekend, cleaning with a renewed energy to love my home. I am fortunate to have a place to share.