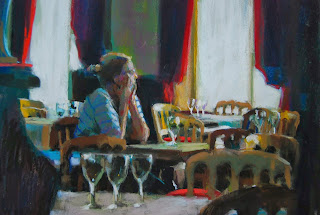 This is a 19x24 pastel of the restaurant at the Musee Jacquemart Andre. I did it while the others were working and didn't need much input from me. I'll be posting some of their work tomorrow.

It's 10:00 p.m. We've just finished for the day. It's been a long day, in the studio since 9 a.m. , breaking only for lunch and dinner, then heading back to the studio.The artists want to get every last minute they can in the studio, and I want to make sure they get what they want. They have produced some pretty impressive stuff. I had hoped to, but I'm not ready to photograph their work yet; there's some finishing up to do. I'll shoot it tomorrow.

Tomorrow's the last day for this class, which will culminate in a vernissage, or private viewing. Guests are invited over for drinks and munchies, and we from the workshop will display the work produced all week. We'll dine afterwards.

Asti leaves Saturday. It's going to be sad. I've gotten used to her beautifule German/English accent. She's from Hamburg and paints the seashore there. See her beautiful pastels on her website (http://www.pastellbilder.de ) and her journal of this workshop on her blog, in German of course (http://pastellbilder.blogspot.com). Warren is staying for next week's class. We may see Meg next week, if not in class, then afterwards.

It's been a small class. I've felt bad that we didn't have more attendance, but the students were ecstatic about it; they got lots of attention from the teacher. Monday, a new class begins; we are expecting 9 students, most of whom speak only French. I'm going to learn some vocabulary words so I can communicate with them. 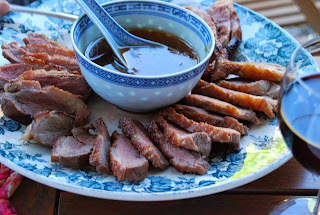 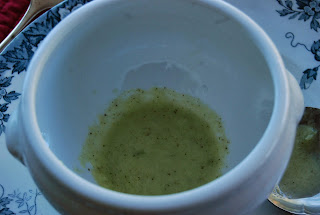 For lunch, Kippy seved magret de canard (domestic duck with an apricot sauce) and cucumber soup, served cold. Those of you who know me well may be surprised to know that I actually ate some soup. OK, the photo shows how much of it I allowed into my bowl, and I didn't finish it, but I did actually take, of my own will, not being forced or coerced, several sips. Had I not sniffed it before tasting it, I might have had more than 3 sips, because it actually did taste pretty good, but the cucumber smell was still in my brain, and occasionally I'd bite into a little lump of the detestable stuff, so with each sip, I had a more difficult time trying to forget what I was eating. Kippy promises to serve it again today.

One of my very favorite quotes:
"A cucumber should be well-sliced, dressed with pepper and vinegar, and then thrown out."
Samuel Johnson
English author, critic, & lexicographer (1709 - 1784)
Posted by Margaret Dyer at Thursday, June 03, 2010