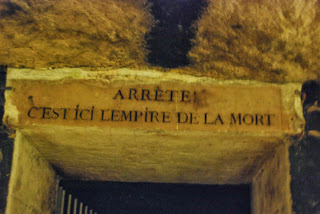 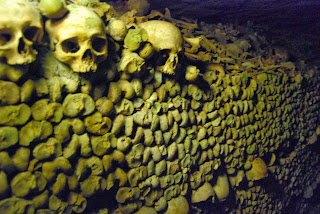 The Paris catacombs were created at the end of the 18th century out of abandoned mines to house the dead; filthy conditions of Parisian cemetaries had been causing sickness. So all the remains in the cemetaries were transferred to the abandoned mines. Wikipedia says: "The removal of the bones began after the blessing of the place on April 7, 1786 and was continued until 1788, always at night, a ceremonial made up of a procession of priests who sang the burial service along the way borrowed by the tipcarts charged with bones and covered with a black veil. Thereafter, this place was used, until 1814, to collect the bones of all the cemeteries of Paris." Read Wikipedia's description of Paris' previous burial conditions. They were horrible.

We spent a good part of yesterday wandering through the dark underground tunnels on the outskirts of Paris. We climbed down a dizzying narrow spiral stone stairwell, which seemed never to end, passed through a long and twisting dark stone hallway, which seemed never to end. I got ahead of our group--I wanted to experience the catacombs in silence, without laughter and chatter. But the passage was so long, I was beginning to think maybe I had come to the wrong place or taken a wrong turn. After maybe a 20 minute walk through the dark tunnels, I finally arrived at a doorway with a sign "Arrête, c'est ici l'empire de la Mort" ('Stop, this is the empire of Death').

I was glad I was alone. It was of course morbid, but it was respectfully and artistically arranged, with quotations about death and life carved in stone thoughout the tunnels. Organized by originating cemetaries, It was much larger than I had expected, with 'occupied' tributaries going in many directions, all gated and locked, so you couldn't take a wrong turn. Toward the end there was a quotation, which made me glad I had walked it alone. The last line read, "The number here is nothing. In every crowd one is alone."

We also visited the Musee D'Orsay. A significant number of pieces are currently in San Francisco while the Museum is being renovated, so we only had 2 floors to explore. But two hours were not enough. I will go back next week. I had to run through the Art Nouveau section, my favorite period, and never got to see Vouillard, another of my favorites. It was a beautiful collection. Just beautiful. I'll need a good part of a day to really enjoy it.

Today: back in the studio. Hopefully we'll get to do some Parisian city scenes.
Posted by Margaret Dyer at Friday, June 11, 2010