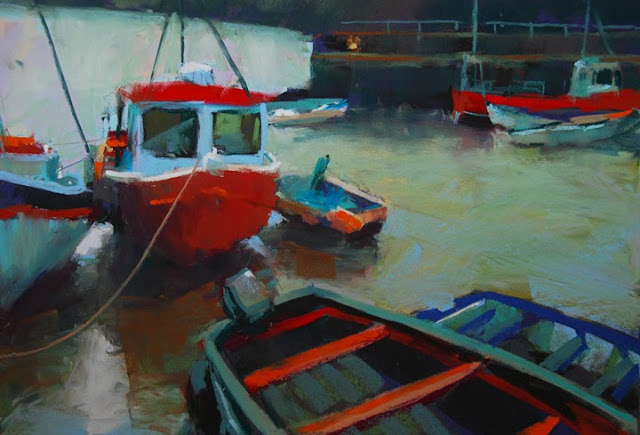 I hit the ground running when I return home--there's so much to catch up on. All the while I'm meaning to close my trip on my blog, hating to leave anybody hanging. So I'm finally getting to it.

I returned home from Ireland with a broken carry-on, new clothes to replace my items from my delayed bag, a large balance on my credit card, about 100 Euros to put aside for my next trip, a mental image of the complaint I would write USAirways, and a sense of renewed commitment to art. Despite all my little annoyances, I returned home with a new respect for plein air work and the dedicated artists who paint that way. I have a lot to learn. And I intend to spend the next year working at it. Ireland--I love. The Irish people are my people, whether they know it or not. They were gracious and gentle and funny and down-to-earth. If you pass them on the street they say melodically, "Hello, luvley day." I look forward to seeing Ireland again, only next time I'll take more time and travel west, maybe try to look up my distant relatives.

I met artists from Ireland, England, Germany, Australia, France, Spain, USA and more. I can still see their faces and hear their voices. One thing quite a few of them do is travel. A lot. Some were off to Italy and France after Ireland. I may work on that too.

Some of the artists I had the honor to get to know in Ireland:
From the USA
Lori Putnam http://loriputnam.com
Valerie Craig http://valeriecraig.com (Valerie won the best in show award)
Rhonda McCay http://rhondamccay.com
Andy Dearwater http://www.dearwater.com

Another blip on my air travel...I was bumped from my return flight in Dublin (they lost my bag again too). I was too overwhelmed to be furious. They rerouted me through Philadelphia instead of Charlotte and put me in first class, which I wasn't going to complain about. I plopped my 40 lb. broken roll-on and my tired body in the front row, accepted an immediate offer of champagne from the flight attendant, and struck up conversation with the man sitting next to me, oblivious of all the dirty masses making their way past us to the back of the cabin. "What were you doing in Ireland?" Wayne asked. Assuming he was like most non-artists, I went into a lengthy definition of what plain air painting is and what paint-outs are and what I was doing in Wexford. "My girlfriend is a plein air pastel artist," he replied when I was finished. I was astonishment and speechless. I learned later, when I had a chance to get online, that she's an award winning pastelist (http://judymillerdesign.com). Puts me to shame. And she has been following my blog for a few years (Hi Judy and Wayne). Four champagnes and a glass of wine later, dinner, an ice cream sundae, and non-stop conversation for hours, we stretched out and slept until we approached Philly. That was my first experience in first class. All the while, well maybe not all the while, I was thinking of all the people back there in economy scrunched up for 7 hours in 18 inch spaces, while I had endless champagne and munchies, a linen tablecloth, stainless steel (rather than plastic) flatware, several courses for dinner and good company. First class was definitely nice. But it might have been better if I had never known what I've been missing, or will be missing.

Anyway, I'm home. Catching up on paying bills, pulling weeds, staying in touch with loved ones, hanging curtains, installing shelves with my new drill, painting, trying to get back into the studio (here's something I've done since I've been home) and enjoying my little house.